I'm No Hero; That's Understood | All the Redemption I Can Offer is Beneath This Dirty Hood

This week I read an interview in Esquire with Bruce Springsteen, in which the iconic rocker describes his mental health journey as well as his lifelong struggle to process his complex relationship with his father. A remote, hard-edged drinker, the elder Springsteen was enraged by what he saw as the weaker facets of his son's character.  It wasn't until he was near death that he tacitly, sparingly acknowledged Bruce's better points, saying only "You've been good to us."


“All I do know is as we age, the weight of our unsorted baggage becomes heavier . . . much heavier. With each passing year, the price of our refusal to do that sorting rises higher and higher. . . . Long ago, the defenses I built to withstand the stress of my childhood, to save what I had of myself, outlived their usefulness, and I’ve become an abuser of their once lifesaving powers. I relied on them wrongly to isolate myself, seal my alienation, cut me off from life, control others, and contain my emotions to a damaging degree. Now the bill collector is knocking, and his payment’ll be in tears.”

That constant, unfulfilled quest for validation took its toll, and the rocker described two breakdowns, the more recent just ten years ago, and credited decades of therapy and the unwavering support of wife Patty Scafila with his survival. 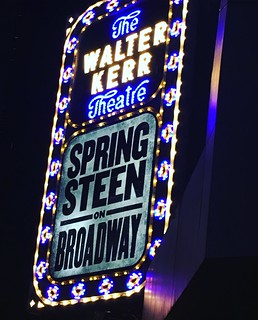 I could say more about that, but the interview tells it far better than I could, and you could find more detail in his autobiography.  Later this month, his Broadway stage show, an abridged version of the book interspersed with a dozen or so of his songs, will air on Netflix.

Having learned these things about him, a man whose music has contributed so much of the soundtrack of my own life, brought back many of the same feelings I wrote about earlier this year.

As an ardent music fan, I've realized I have a tendency to fill in the blanks in what I know about artists' lives; their characters get shaped in my mind by their lyrics, their stage banter, and whatever they choose to share with the media.  When they do or say something that departs from who I've decided they are, it's jarring.  The rash of premature deaths in the past year notwithstanding, this happens in smaller ways more often by the occasional revelation, misplaced statement, or decision.

Something like this happened this week.  I learned something about another artist whose music I love, which suggests that we'd be in a pretty fundamental conflict on certain social issues if we actually knew each other, which we clearly don't.

And I don't know what to do about it. Unlike some artists, this person's convictions are not widely known, and thus I have little to go on other than scant facts and assumptions you can draw by association. I don't know enough about the situation to decide if it changes how I feel about this individual as a person. If it did, it would change my relationship to the music, which felt yesterday like a house that had been robbed. That would have a follow-on effect on how and with whom I spend my time, especially over the past year.

Part of me wants to go hardcore, only because of the time I spent fighting on this particular issue and in this particular space.  On the flip, I'm reminding myself that no promises were made or broken here.  We are not friends; I do not have the right to expect my values to be shared or my allegiance to be reciprocated.  The music is out there, take it or leave it; anthems by flawed heroes for flawed fans, maybe that much sweeter because of the wrinkles and scars we can compare to our own.
Posted by Christian Paolino at 12:52 PM