Thank You, and Please

THANKSGIVING DAY
"Thank You, and Please" 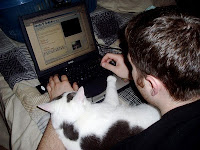 I am grateful.  See me give thanks.  I rub against their legs and purr, look into their faces, and thank.  They know when I give thanks.  My thanks are always followed by "please."  I can make them sound alike.  If they won't give me more, I walk away as if satisfied, like my paws, wash my face, and pretend it was a feast.  But I am washing for the next course.  I am ready in case more is coming. My giving thanks may be rewarded.  I will give thanks, even if nothing more comes.  A cat can be grateful.  But they have been good to me; they will be good to me again.  "Thank you" and "more please."  I am their cat.  They are mine.  I am thankful.  I expect more.

From Cat Psalms: Prayers My Cats Have Taught Me by Herbert Brokering, 2003
Posted by Christian Paolino at 7:05 PM No comments:

The Christians and the Pagans

This past weekend, a handful of us journeyed northward at (for me) a crazy-early hour for a Saturday, to St. Anne's Episcopal Church in the Morrisania section of the Bronx.   The church is well over 100 years old, and -- as the name and suggests -- was the home and is now the resting place of Lewis Morris, one of the signers of the Declaration of Independence, and his half-brother Gouverneur Morris, who is credited with writing its preamble.

Today the church's ample property is literally an oasis.  Surrounded by low-rise apartments and bodegas, the lumbering hill peppered with trees and ancient gravestones is one of the few green places for neighborhood kids to play.  The Mott Haven section of the Bronx is one of the nation's poorest, although it has enjoyed a significant drop in crime in recent decades.  The church's website speaks of the success of its after-school program, and the sprawling building was alive with activity for much of the day we were there.

The purpose of our visit was a workshop for congregations more seeking to be more welcoming of gay, lesbian, bisexual and transgender people who might come in seeking a spiritual home.  As part of the Believe Out Loud program, The OASIS and Integrity are trying to encourage all area churches to learn about LGBT people's "issues" with the church and how to be sure everyone feels safe and included.

The turnout began with two panels of people from various backgrounds speaking about their faith journey and how they came to be involved in this work.  Being in an urban setting, some of these were not the same stories we hear in the suburbs.  We heard from both a mentor and a graduate of "The Church," a Saturday night outreach program for LGBT youth, many of them homeless or otherwise at-risk, who congregate in the West Village. This program offers workshops in art and dance, as well as access to health care and social workers, and a hot meal coordinated by a professional chef.  For many of them, being "out" in their families or neighborhoods is simply not an option for reasons of their actual safety.  The same day we were meeting, there was a rally and march in protest of recent gang-related violence in another part of the Bronx.  The brutal attack against a local man and two teenagers, which has been ruled an anti-gay bias crime, was yet another reminder that we were a long, long way from Christopher Street and the relative safety we take for granted.  Its organizer was another of our speakers:  Dirk McCall is the director of the Bronx Community Pride Center, which provides myriad services and activities for the region.

Then, on Monday night, I joined some local friends at the 20th Annual Pagan Thanksgiving, held this year at Halcyon in Montclair.  This tradition has grown from a rather haphazard gathering of friends (plenty of turkey and beer, not so much napkins or forks) at an Upper Mountain Avenue residence known as the Home for Wayward Garden Tools into a pretty lavish event.  The hosts provide turkey and ham; everybody else brings homemade side dishes (although I can report there was a run on the deli case at Whole Foods by folks toting their own Corningware to be filled.  Did we all suddenly become eco-friendly?).  A collection of both cash and non-perishables benefited the Human Needs Food Pantry.
Posted by Christian Paolino at 9:28 AM No comments:

When You Don't Hear From Me

Clive Staples Lewis - Scholar and Spiritual Writer (1963)
There is not always anything worth writing about, but sometimes, a bunch of things happen at once, and I can't process it fast enough to set out there in bite-sized blobs for you to share. "Once the excitement does down," as my paternal grandmother was fond of saying, I try to piece it together after the fact as best as I can and still try to present each day as it occurred. Sometimes this causes wonky things to happen with the blog-eating software and I have to do shady things with the posting date to get it to show up in the various sources of shameless self-promotion. Thus there may be an absence of posts, and then a bunch all at once. I'll try to be better about this.

I really wanted to participate in NaNoWriMo (National Novel Writing Month), but didn't.  I have several novels in my head, that have never made it to paper.  Maybe I should try some of Latka's cookies.  Alex ate them and wrote an opera because he couldn't sleep.


Posted by Christian Paolino at 1:57 PM No comments:

So tonight, we saw the premiere of the Nutley Little Theatre's production of Edward Albee's The Goat, or Who is Sylvia?. The theater kindly donates the proceeds of each opening night to a different nonprofit, and The OASIS has been the beneficiary of their generosity a number of times, for which we promote the shows in return.

I don't know how many of the fairly full house (and, as the name would suggest, we're not talking huddled masses) were there because of us, but I have to suspect that if they were, a few of them might have wondered if we had read the script in advance. I thought being connected to the production of The Little Dog Laughed, with its brief nude scene, would have raised eyebrows, but I was not prepared for just how far outside the white picket fence we were going tonight.

Fortunately, we don't belong to a church that has its collective head in the sand. That said, this play is disturbing, even if you go in knowing what it's about. Without digging in too far, the male lead (Martin) is a successful middle-aged architect, husband in a good (and still passionate) marriage, seemingly okay with his gay teenage son (Billy). Picture of happiness in Suburbia, right? However, for reasons even he does not seem to understand, he has taken up with, yes, a goat, that he encounters while trying to find a weekend home in farm country, a request that ironically was made by his wife, Stevie.

His TV-newscaster best friend (Ross), set to interview him about a big upcoming project, immediately notices how distracted he is and drags the truth out of him, then subsequently takes it upon himself to share the news with Stevie by way of a letter. She -- quite understandably -- loses her mind, destroys the living-room, and takes off, telling him, “You brought me down and I am going to take you down with me!”

What was interesting to me was the way each character interpreted the situation. Ross implies that some other kind of infidelity would have been almost fine, but feels completely vindicated in betraying his friend's trust. Stevie seems more angered by each of Martin's repeated attempts to make his interactions with Sylvia (yes, the goat) sound like an actual relationship, wailing “How can you love me when you love so much less?”

Billy (the son), who darts in and out like a startled deer as his parents dismantle their marriage and their living room, finds that having the carpet of normalcy pulled out from under his home life is bringing more unresolved feelings to the surface. And Martin, bless his heart, knows on some level that what he's doing is wrong, but seems woozily unable to process why everybody is so focused on the physical act and is unwilling to see it as the natural expression of what he feels for the apparently irresistible Sylvia.

Even as they battle, Stevie and Martin share their normal compulsive debate about correct grammar and syntax. The laughter that resulted felt odd in the midst of such credible portrayals of pain and anger, especially from Stevie (deftly rendered by Victoria Steele, whom we loved in last year's And Miss Reardon Drinks A Little). They also had a habit of responding to the second-to-the-last thing someone had just said, by which A Certain Party said he was reminded of the repeated device in Airplane!:

"It's the little room in the front where the pilot sits, but that's not important right now."

I will not spoil the ending. As uneasy voyeurs to a situation beyond anything we will hopefully ever have to face, we left there feeling, as one says, "the need to bathe," to rid ourselves of some unpleasant residue. Which, I suspect, is exactly the effect Albee was aiming for.
Posted by Christian Paolino at 9:52 PM 2 comments: