She Did It Her Way: Remembering My Grandmother

Firstly I want to thank you for taking the time to remember my grandmother with us today. She did love a gathering and some of her happiest moments were the birthday parties that we staged in her honor, especially in recent years.

It’s hard to imagine having had ninety-seven birthdays. For most of them, someone probably started the familiar chorus of Stolat! Stolat! Niech żyje, żyje nam.... ​May you live a hundred years. And she must have taken them seriously, because she came pretty darn close.

I feel very grateful to be a white-bearded old man myself--and though she couldn’t see too well by the end she never missed an opportunity to tell me to shave it off--before I had to say goodbye.

I lived in her house on two separate occasions, once when I was a toddler, and one of my earliest memories is eating Froot Loops with my cousin Diane in the apartment upstairs, an apartment that would later be my first home of my own. And in between we were always welcome at her table for ​pierogi​ or deep fried calzones or pot roast, or whatever was on the menu.

She wore many hats over the years: softball player, school lunch lady, master gardener. I remember countless trips to the mall in her series of Oldsmobiles, with a pack of Kools and a bingo stamp in permanent residence in the center console, and the pine tree hanging from the rear view mirror.

One of the main things she helped instill in me is a love of music. A progression of three parlor organs, each one grander and more complicated than the last, held a place of honor in the living room, and--though she never quite mastered what all the buttons did--playing, and the sheer fact that she could--​ brought her endless joy. The soundtrack of those years includes many a halting rendition of “Moonglow” or “Mack the Knife” or “Spanish Eyes”. Over the years there were a number of songs, from Sinatra, or Bobby Vinton, or Susan Boyle, or Clay Aiken, that she took on as a personal anthem for a season or longer. She encouraged me to stick with playing beyond childhood lessons and i know she was proud of my amateurish efforts even if they weren’t exactly her style.

After we lost my grandfather 21 years ago, Jessie was on her own for the first time in her life. Like her mother, she was determined to maintain that independence for as long as she could, and she did, for a long time. As she gradually had to concede her autonomy and allow others to care for her, we filled the time and tried to distract her by sharing memories and getting her to talk about happier times.

One of my favorite stories was the time the family towed the camper down to Disney World. Grandma wisely elected to fly down and meet us rather than endure three days in Grandpa’s suburban with six other people. On the day she was supposed to arrive, it was discovered that--true to form--everybody thought someone ​else​ knew her flight information. In those pre-cell-phone days there was no easy way to find each other, and somehow grandma--in a strange city, without a solid idea exactly where we were--got herself to the campground and came marching up to us, suitcase in hand, madder than a hornet.

She didn’t think it was too funny at the time, but It was an example of the resourcefulness her immigrant, depression-surviving parents must have instilled in her as she navigated growing up in Greenpoint, returning to her native Bloomfield as a young bride and mother, and then to Little Falls as the eventual matriarch of an ever-growing family. She got such a proud gleam in her eyes when she recited how many grandchildren and great-grandchildren she had. While in some ways she was definitely a product of her generation, she was also surprisingly progressive at times, and gracefully accepted the changes and chances of this life, and the direction each of ours took. We... you... were her life’s work, and she would be not-so-secretly pleased to see you all here.

Though she wasn’t quite around physically for those hundred years, she’ll live on a lot longer than that in our memories and stories, a lady who truly did it ​her​ way. 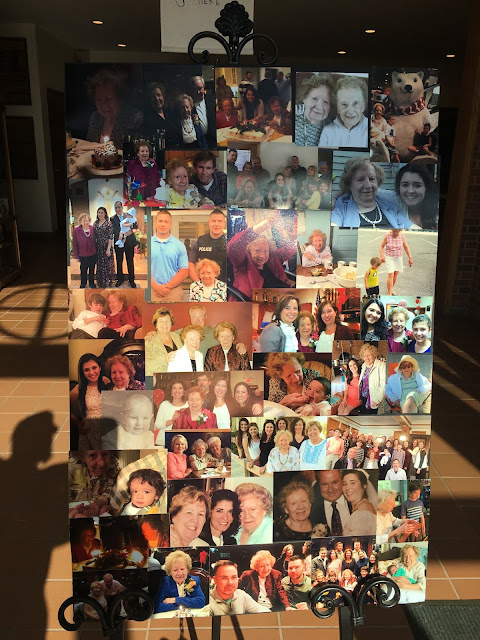 Posted by Christian Paolino at 6:22 AM No comments: