This morning's groggy scan of the Face-space feed revealed that the annual "Keep-My-Christ-in-Your-Christmas" sanctimony has--like the onslaught of reminders to get out there and shop--crept yet earlier. I'm convinced that in my lifetime we will start seeing ads for next Christmas before this Christmas is over.  Of course the important season of Advent gets completely lost in the tide, but that's a rant for another day.

This time the outrage de l'année is because That Omnipresent Coffee Company -- having dispensed its last not-actually-pumpkin spice latte for the year--has gone with a plain red motif for its disposable cups during not-really-peppermint season.  That's right! No Santa Claus, no tree, and, shamefully, no Baby Jesus, surrounded by adoring animals.  So you must boycott, and you must tell everyone.  Because this is a Christian country, by golly, and we've got to make sure nobody forgets!

The irony that this is being held up as an example of "religious persecution" on the 77th anniversary of Kristallnacht simply cannot be overstated.  More on that later today.

The fact that this is getting any traction whatsoever suggests American Christians as a group have become so warped by privilege, that we confuse any thwarted attempt to impose our beliefs on the greater society as "persecution".  And let's be clear. It's not like Allyourbucks used to have Christian images on their cups and abruptly took them away.  If you want to be outraged at them, why not check out their resistance to label GMO ingredients on their products, or the fact that we're still using so many throw-away cups at all?

The Rev. Emily C. Heath summed up my reaction so well that I was hesitant to write about this topic at all:

I could not say that any better, and I commend her entire post to you. I actually lament the commercial bonanza that Christmas has become, and the fact that--to get us in the mood to spend--we're surrounded by saccharine schlock so early so that we're sick of it by the time the actually holiday  arrives. But any one of us could choose to walk away from all that and observe the season--or don't--however we please.

I did, however, resort to arcane sacristy-rat humor to further point out just how ridiculous this whole manufactured snub truly is:

A Proclamation to the Outraged:

The Feast of Christ the King not being for several weeks, and thusly the season of Advent to follow, any talk of red cups (other than for the movable feast of Beer Pong) is verily premature.

Ye are reminded that the acceptable and orthodox cup choice of the day remains consistent with the weeks After Pentecost, known by our Roman friends as Ordinary Time.


This message (was not) brought to you by the Homer Laughlin China Company, manufacturers of Fiestaware. With Fiestaware, there's no excuse for sloppy orthodoxy on your table! 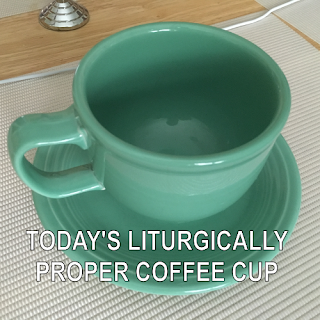 Posted by Christian Paolino at 9:40 AM